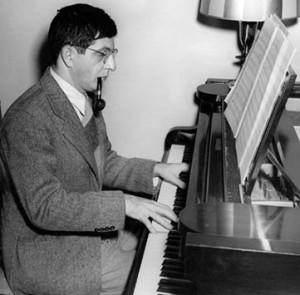 Bernard Herrmann (1911-1975) is one of the veritable masters of the film score, and his scores for Hitchcock’s films in particular still resound today.  Perhaps his most well known sonic contribution is the violin “screech” from the shower scene in the movie Psycho.  This cue is today almost a cliche, and most people do not know that film also contains beautifully haunting additional music by Herrmann.

Herrmann did in fact write many concert pieces, but none featuring brass alone.  His music has been transcribed and arrangement for many different types of ensembles, including brass.  The piece we will look at in this post is an arrangement of the prelude from Psycho.  This music accompanies the tense opening scene and subsequent driving moments.  This particular arrangement was done by Brad Rouillier and performed by The Aveley and Newham Band conducted by Nigel Taken.